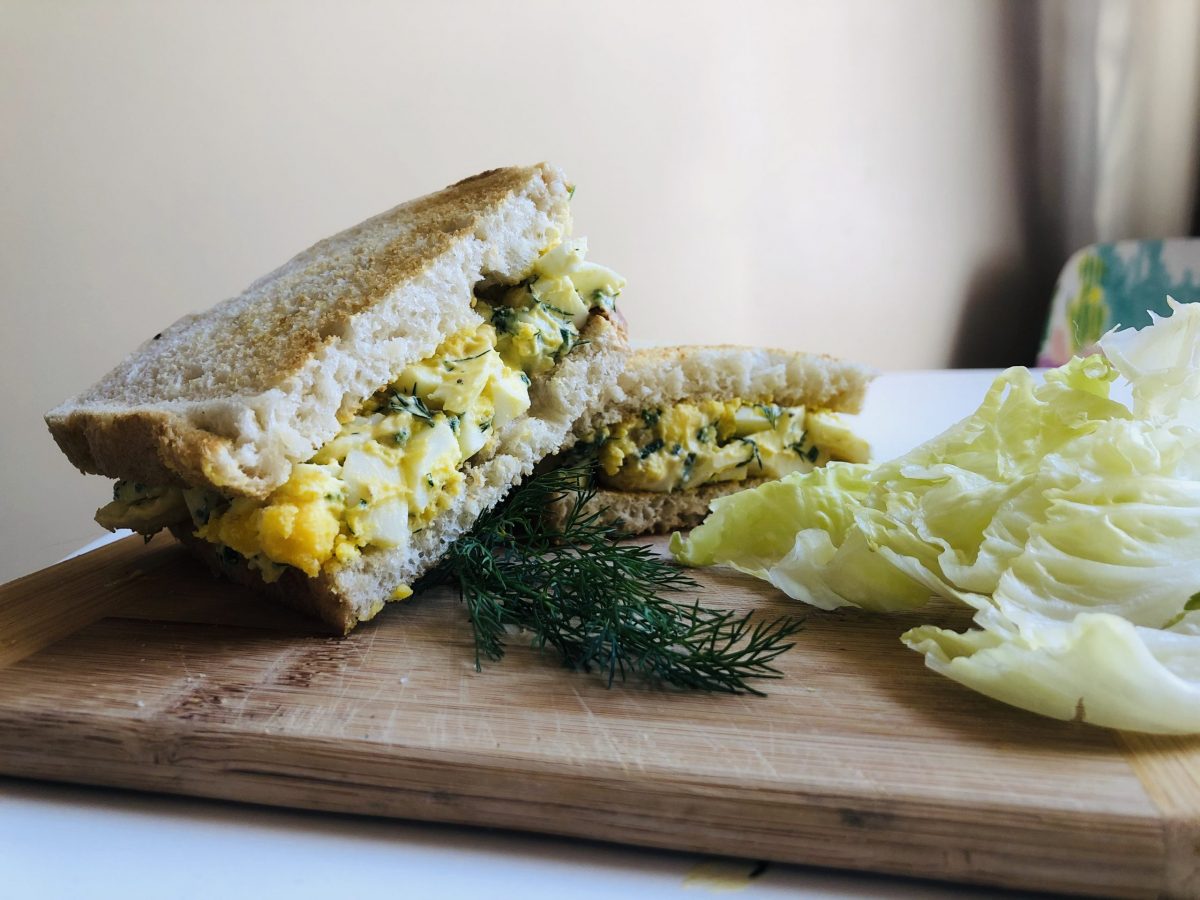 I was making egg salad today and thoughts of my dad came flooding into my mind. Why does egg salad remind me of my dad? Well, for starters, he never needed to consult a recipe before making hard boiled eggs, and I do.  He never used a recipe when he made egg salad for us kids when we were growing up. I, on the other hand, need a recipe, every time.

Vince Is In The House

When we were growing up, my dad was always up early for work and on breakfast duty. Cold, snowy mornings we awoke to Vince stirring a big pot of Cream of Wheat on the stove. He firmly believed we needed a hot breakfast to get through the day. He would bang on the kitchen pipes that led up to my brother’s room to wake him. If he had to wake us up in person, he would say, “Wake up! The world’s on fire! We need you to carry water.”  At the breakfast table he would talk about doing something big that day. “I’m going to give an elephant a bath,” he would say. We almost believed him.

My dad started cooking more often later in life, after my mother had a heart attack, even more so after she had open heart surgery. The son of Italian immigrants, he had his “specialties”, those things he could whip up for lunch or dinner without a recipe that came out the same way every time.  He did not make “sauce”, or eggplant or chicken parmigiana or any of the foods from his Italian upbringing. What he did make was comfort food. Maybe it was the nature of the food that made it comfort food or maybe it was just because it was made by him. Whatever the reason, the results were lasting because the comfort lives on.

The Stuff of Memory

One family favorite were Vince’s “subs”.  He would start by chopping iceberg lettuce with a round kitchen implement with a handle that resembled a biscuit cutter, only the edge was serrated. It was the sharpest, most dangerous thing in our kitchen. I have never seen another one like it anywhere since. After the lettuce was sufficiently decimated, he would toss it with just the right amount of store-bought Italian dressing.  He would spoon that onto a bulkie roll, allowing the dressing to soak into the roll a little bit. He topped that with sliced tomato, hard salami and provolone cheese.  The subs were toasted in the oven until the cheese was melted and bubbly – Mwah!

Vince also made a mean omelet. It was the simplest, most scaled down version of what an omelet can be while still being able to be called an omelet. No bells and whistles. Two eggs and a splash of milk, whisked and cooked until just ready to accept one and a half slices of white American cheese. It was then folded over in the middle, sealing the cheese inside its fluffy, golden perfection. Each one always slid off the pan onto the plate cleanly. I cannot recall a single time one ever got too brown, or burnt, or fell apart.

In addition to his specialties, my dad had sayings, which I now refer to as “Vince-isms”.  The ones that were in Italian, given the moments that he used them, were usually not meant for repeating. To confirm this, we would sneak a glance at our mother’s face to gauge her reaction. If her face was pinched, we knew not to laugh.

My mother was of French-speaking Canadian descent which left her accent open to ridicule in our household, hence some Vince-isms were plays on French words.  “Soire yourselves”, although it bears no resemblance to anything truly Français, was universally understood to mean “Sit down for dinner”. Cutting the grass was “Coupe de grace”. You get the idea.

He would often tell us about the time one of the soda companies introduced a new flavor, celery soda, back in the day. “It went over like a lead balloon.” Some phrases had a corresponding action that accompanied them. “Crazy, man, crazy” was anything having to do with “hippies” or fads and he would shimmy his hips a little every time he said it. He would sing the nonsense lyrics to John Philip Sousa’s Stars and Stripes Forever: “Be kind to your web-footed friends, for a duck may be somebody’s mother.” “And the monkey wrapped his tail around the flagpole” from the National Emblem March was another fave. When he sang “Strangers in the Night” he would bat his eyelashes coyly. “Let’s go this way, they fixed the roads”, he would instruct us.

Once the eggs were boiled, peeled and cooled, my father would chop the eggs to perfection with an aluminum egg slicer. It had a little cradle where you sat the egg for slicing. It had nine wires across. He would put the egg in the cradle, bring the top down and slice it one way, then, keeping the slices in the shape of the egg it once was, turn the egg and slice it again. In retrospect, it could have been the useful yet slightly dangerous kitchen implements that made cooking so enjoyable for him.

Vince knew his cooking was simple. He used to joke about things that were “gormet”, which rhymed with “get”.  The simplicity of his cooking belied his inner complexity.  He was liberal (to a fault), sometimes sarcastic (“Famous last words…”) and the hardest working man I will ever know. Not one for grand emotional displays, his simple cooking was one of his most loving gestures. He has been gone for over ten years and here I am making egg salad thinking of him. And although it is not his recipe I am using, I hope my family can feel the love in every bite.

One thought on “On Love and Egg Salad”