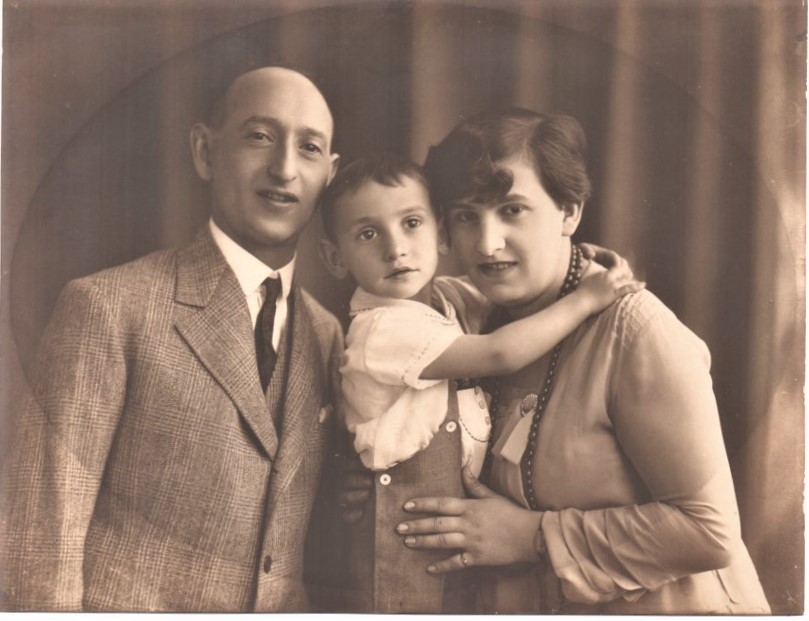 What makes any one person a survivor? Is there a characteristic, an idiosyncrasy, that might lend itself to survival through one of history’s most horrific campaigns of mass genocide? Is it luck? Fate? Faith? Family? Or is it a series of synchronicities, uncanny coincidences, that add up to a reversal of fortune that defies all odds? The answer is anybody’s guess. This is Vladimir’s Story.

Vladimir Munk’s father, Karel, was in his third year of studying Chemical Engineering at the Czech Technical University in Prague when he was drafted into the Austrian-Hungarian army. It was 1914, the beginning of WWI, and many Czech soldiers, upon being sent to the Eastern Front to fight against Russia, surrendered voluntarily to the Russians instead of fighting their “Slavic brothers”. These Czech POWs then volunteered to fight side by side with the Russians against the German and Austrian forces and were organized into units called legions. “My father joined the Russian legion. Legionaries were considered the most patriotic citizens of newly created Czechoslovakia. Many of them remained in the military and became the nucleus of the Czechoslovak army,” explained Munk. After the war, Munk’s father returned to school in Prague. It was there that he met his future wife, Hermina Gesmai. Karel finished his studies with a degree in chemistry and returned to his hometown of Pardubice where he began working as a chemist in a large industrial distillery. Karel and Hermina were married in Pardubice in 1923.  Although they were both Jewish, they were married in a civil ceremony at City Hall.

Czechoslovakia grew to be one of Europe’s most prosperous states between the two world wars. In that golden era, on February 27, 1925, Vladimir Munk, the only child of Karel and Hermina Munk, was born. Karel was promoted to manager of the distillery, and the family resided in a comfortable, two-story flat attached to the factory.

“My earliest memories of Pardubice are my earliest memories of my life because I was born there and I lived there until 1942,” said Munk. “We lived in a big factory and most of my time was spent in the factory yard where there were huge piles, mountains, of coal. My friends and I were going up the mountains of coal, playing hide and seek there. That was my childhood playground,” said Munk.

They were wonderful vacations as a child, two weeks in the winter in the mountains of northern Czechoslovakia, in Krkonoše, near the border of Germany where Hermina would teach Vladimir how to ski. His mother would walk with him regularly to the open-air, ice skating rink in town. Each December brought with it a small, traditional Czech Christmas tree decorated with ornaments.

“In the summer my mother and I went to the mountains for one month,” said Munk. “My father usually joined us for the last few weeks and we returned home together.” There was swimming, soccer, bicycling and boy scouts in the summertime. Hermina loved tennis, and they went often to the local tennis club, of which they were members. The family adopted a dog, a fox terrier, named Ĉigy, and his mother had a garden, and geese and rabbits that they fed together.  Munk added, “We had everything we needed.”

Vladimir attended the public school in Pardubice. “My parents were very good friends with a family living in a factory on the outskirts of town,” said Munk. Their two boys traveled to school in a horse drawn cart that would stop at the distillery to pick him up. In a city of some twenty thousand inhabitants, everyone spoke Czech, and Jews and those of Jewish origin in mixed marriages accounted for less than five percent of the city’s population. Vladimir characterizes his family’s religious observance as “relaxed”. They belonged to the synagogue and were always in attendance on the High Holy Days. For Vladimir there was one hour of Jewish religion class after school on Saturdays.

“I was able to read Hebrew and I was able to say some Hebrew but that was it,” said Munk. “My rabbi wrote what I had to read in Latin. It spoiled my winter vacation because I had to memorize it. When I was called, I closed my eyes and slowly recited what I remembered.” And so young Vladimir, in his first hat and long pants, with aunts and uncles in attendance, completed Bar Mitzvah, the ritual coming of age for Jewish boys.

The world outside the bucolic corner of Pardubice was, however, filled with unrest. Adolf Hitler had been threatening to take the Sudetenland, a region of Czechoslovakia occupied primarily by ethnic Germans, by force.  To appease him and prevent war, leaders from Germany, France, Italy and Great Britain signed over the territories to be annexed by Germany on September 29, 1938. Czechoslovakia was forced to accept the terms or face Hitler alone. Prime Minister Jan Syrovy announced, “We are abandoned.” Vladimir and his family would soon feel the same.