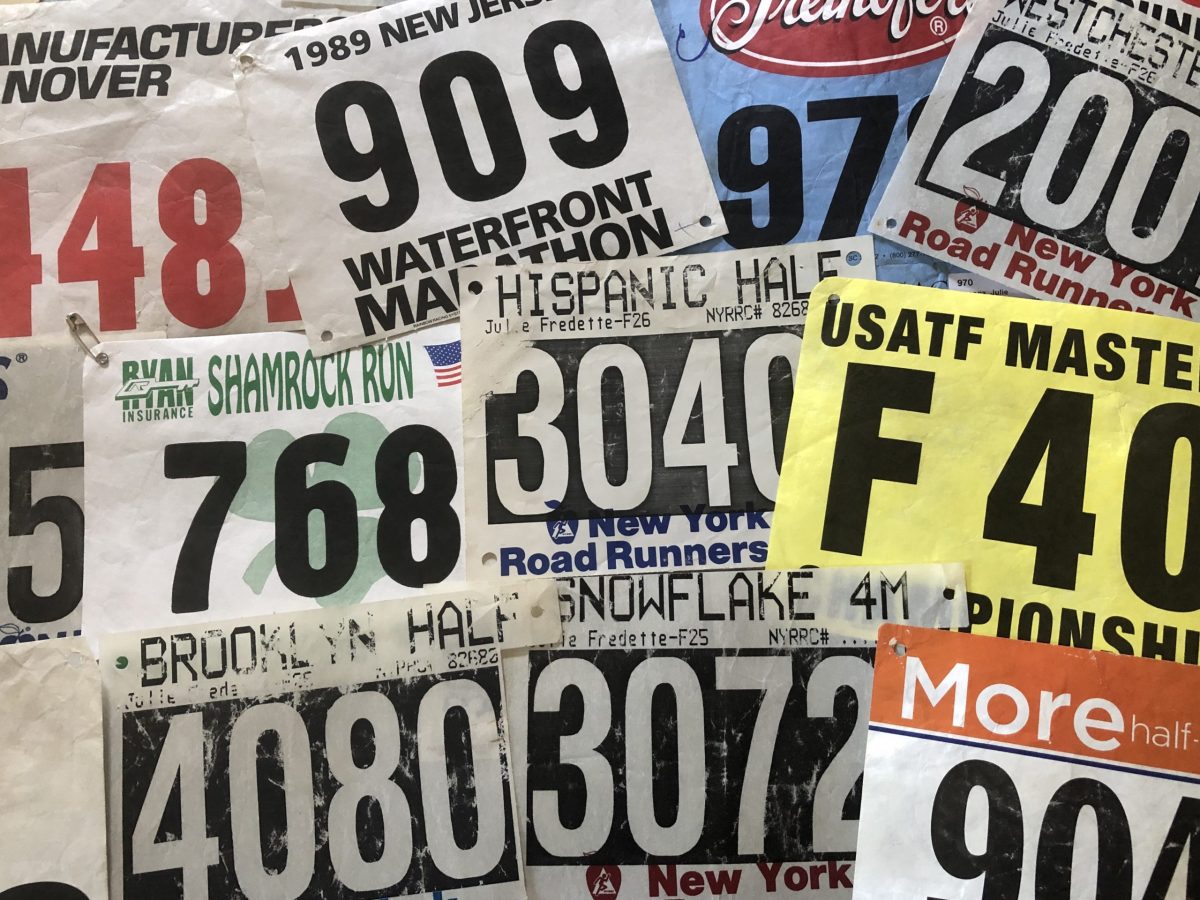 Running came into my life and saved me when I was going through my first divorce.  It in some ways precipitated it and then saved it.  I watched the New York City Marathon one November in the late eighties and a switch went on.  I needed to run.  I had a friend from work in the City who was a runner and we agreed to meet up in Central Park for a run.  Rachel was a few years older than me and she and her boyfriend had been running together for years.

One and Not Done

I don’t remember the details of that first run. I don’t know if I even had the appropriate gear.  I remember it was tough, and that I was hooked.  That winter I ran my first road race in Central Park with Rachel and her guy.  I wore my New York Mets hat with the pom-pom. It was a crisp, cold day and I remember shivering at the starting line. I loved every minute. The self-deprecating conversation of the runners around me before the starting gun.  The number pinned to my shirt. The way I slowly warmed up and shed layers, tying my outer jacket around my waist as I ran. Crossing the finish line.

Over the years to come, I would run many races. I became quite a pro at pinning the paper number to my shirt.  It would be used to record my place and time in each race. Since those days, many big races use a microchip to record race times, but I love having a folder full of my old numbers as proof of the races I finished back in the day.  I went from running 5k’s to 10k’s, to half-marathons and then signed up for the New York City Marathon.  I bought a t-shirt from the New York Road Runners Club to motivate me in my training: “Training for the NYC Marathon – 1988”.  I would not be on the starting line that fall.

As a young married couple, Steve and I were joined at the hip. We lived together, worked together in the same office, partied together with our coworkers – we did everything together.  Soon after it began, my love affair with running became known as “my thing”. My newly found independence through running, coupled with getting my driver’s license at 24 (all the women in my family were late bloomers in that regard) and starting a fledgling catering business had upset the conjoined apple cart that was my marriage. It tipped over.

Steve moved out that fall, to Brooklyn, a block away from the co-worker of ours that I sensed was the reason for his “depression” and “needing time to think”. I kept running. I would run six miles every night around my neighborhood park in Bayonne, NJ where I continued to live in the beautiful house I had once shared with Steve. I lost weight, people called me “petite”, a word never used to describe me before.

Off Again, On Again, Finnegan

My running was therapy. It made me feel better. But given my emotional state after the breakup of my marriage, it was not going to get me across the finish line of a marathon that fall. When I finally admitted that to myself, I wrote the marathon organization a witty letter about my marriage debacle. I begged them to honor my entrance fee and save me a spot in the marathon the following year. The letter did the trick: I was in.

A year passed. Time heals, right? Unfortunately, not much could take the sting out of the Dominican Republic divorce that followed. Or the Archdiocese of Brooklyn annulling our four-plus year marriage. Or the loss of my extended family and in-laws, who went radio silent after Steve moved out.

But I had my marathon do-over coming up. Time to buck up. I trained. I had no idea what I was doing. I thought I had a handle on it. I ran my longest run a few weeks before the November date in Central Park: three plus loops of the park, around nineteen miles. Runners like to say, if you can run three, you can run five. I extrapolated 19 to 26.2.  My favorite phrase after the marathon was, “It’s that last .2 that’ll get ‘ya.”

I arrived at the Staten Island staging area to run my first marathon, dropped off by my very new boyfriend (he would be husband #2 a few years later). I was not feeling the race that morning, but there was no turning back. I did not want to have to pee so I had held back on drinking fluids prior to arriving at the starting line.  Women around me were peeing standing up, into Dixie cups. Pulling aside their shorts and leaning up against random buildings nearby. Neat trick. I felt very alone.

The gun. The hordes began to cross the Verrazano Bridge. I was so excited, I was literally bounding. Into Brooklyn, the bands and the crowds were so motivating. Even though I was alone, I began to feel like a part of it. The rest was a blur, up until I entered Central Park.  The crowds were so close to the runners on the course, right on the curb lining the road.  I could see people looking with concern in my direction as I passed. I remember thinking, ‘Someone must be in really bad shape back there.’

Kids, Don’t Try This At Home

I remember Central Park South and making the turn back into the park after Columbus Circle.  That was when my legs started to buckle.  Runners around me tried to pick me up, thinking this was regular exhaustion and that I could make it that last quarter mile. It was so kind of them to stop and try to help me when they were so close to finishing themselves. I ended up on my back. Lights out.

I woke up, or came to as it were, in an EMT tent somewhere in Central Park.  I was immersed in ice water, and my hazy brain assumed I was going to die. I did not feel sad or angry or robbed. I felt strangely peaceful. And then I was back.  The medical staff kept asking me my name and I thought I was saying it but it came out garbled.  When both of us were finally speaking clearly, I understood that I had come in with a temperature of 107˚. I was lucky to be alive.

They would ultimately transport me to a local hospital where I would be given an IV. I had a hard time connecting with my cheerleaders, my friend Rachel and my boyfriend. It was pre-cellphone days. They finally found out what hospital I had been taken to and came to retrieve me.

I lost two toenails in the aftermath, but for some reason, not my pride. I had the nerve to write the marathon organization another letter, telling them of my ordeal and that .2 from the finish line was close enough. They sent me my medal. I felt I had earned it.

I am not sure what the moral of the story is. I did go on to redeem myself by running and completing the London Marathon years later. But the medal I earned in New York is sweeter somehow. After writing this, I feel like there could be one more marathon in me yet. Three’s a charm as they say. It worked for husbands.😊

6 thoughts on “Running For My Life”